The Topps Company (“Topps”) is the owner of US Patent No. US6660316, directed to a candy product having the commercialized embodiment “Juicy Drop Pop” (“JDP”): 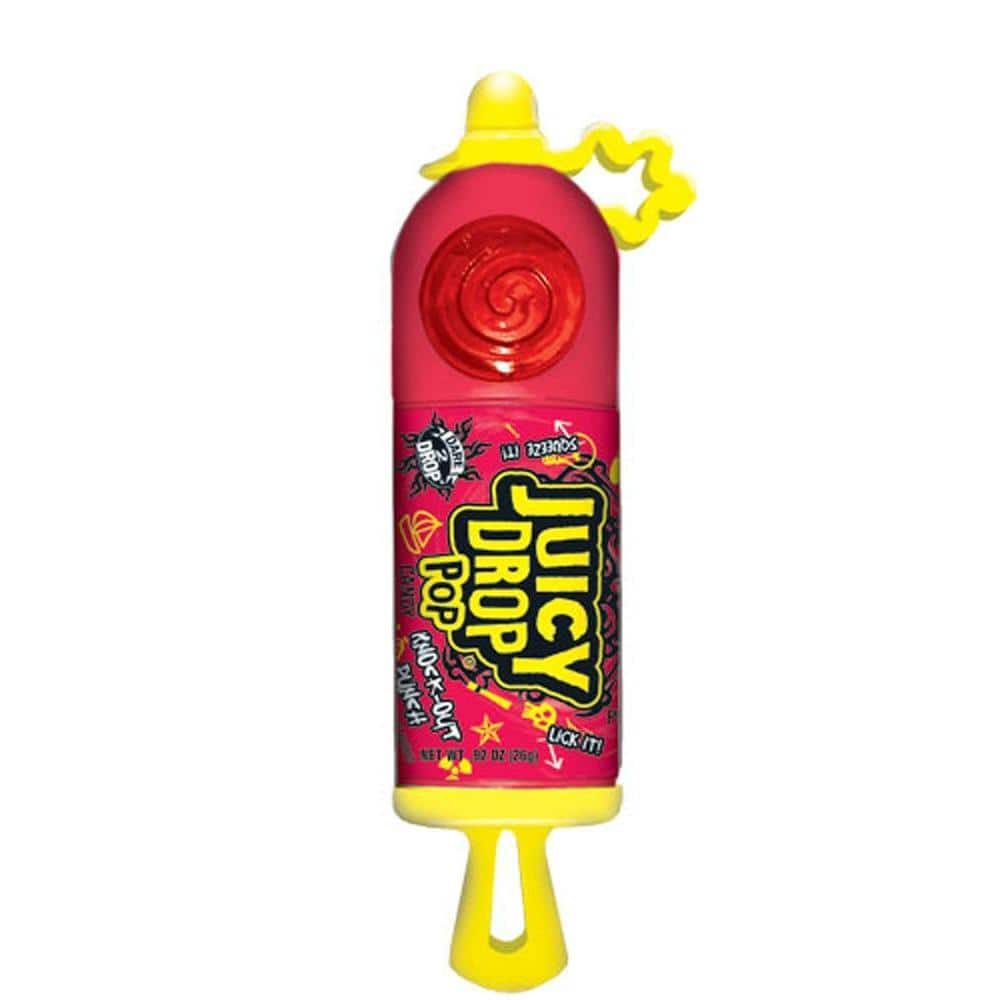 Claim 1 of the ‘316 patent recites, in pertinent part:

a housing including a front face and a back face, said housing defining an upper chamber and a lower chamber;

a candy holder for supporting a piece of candy and including a handle at its lower end, said candy holder being receivable within said lower chamber to close the chamber…

The specification does not describe any other possible orientation of the two chambers, nor do the figures illustrate any such alternative arrangement.  Rather, the ‘316 patent describes the claimed product as follows:

A candy product according to the invention comprises a housing having separate chambers for holding a piece of hard candy and a compressible juice bottle containing a flavored liquid.  The hard candy is secured to a candy holder which can be placed in the lower chamber of the housing and removed for consumption.  The juice bottle is made of a pliable material which is accessible through openings in the housing so that an external squeezing force can be applied to the bottle to dispense liquid droplets onto the candy. Prior to the summary judgement motions at issue, the District Court held a Markman hearing and construed the disputed terms of claim 1 as follows:

Claim 1, Part 1: “a housing defining an upper chamber and a lower chamber” was construed to mean “a housing with two compartments, where one compartment is above the other”

Decisions on the Cross Motions

Having so construed the claims, the Court further noted that the ‘316 patent “frequently uses directional language to specify the orientation of the…compartments.” The Court found that each chamber also had specific functions that relied on that chamber’s position with respect to the other.

Koko’s argued that their SSP product did not literally infringe claim 1 of the ‘316 patent so construed due to the side by side position of it’s chambers.  Topps valiantly tried to argue that the terms upper and lower “served only to spatially arrange the housing’s two compartments relative to each other, but did not specify a frame of reference that fixed the orientation of the packaged candy product as a whole.”

With respect to the orientation of the chambers, the Court held:

Plaintiff’s argument is foreclosed by the Markman Order in which this Court unequivocally held that each chamber has specific functional qualities that are position-dependent.  In particular, this Court explicitly rejected Plaintiff’s proposed construction of “upper” that would allow flexible orientation between “upper” and “lower” chambers…Here, SPP, designed to stand upright on its base as shown,… plainly does not have an upper chamber nor a lower chamber.  Because SSP’s two compartments are plainly side-by-side instead of having one compartment above the other, SSP does not meet Claim 1, Part 1.

On this basis, the Court held that Koko’s was entitled to summary judgment as to literal infringement.

Infringement under the Doctrine of Equivalents

Topps provided evidence in the form of expert testimony in order to support their claim of infringement under the doctrine of equivalence.  Topps’ expert argued that the only difference between Topps JDP and Koko’s SSP was in the relative orientation of the chambers, which would make no difference in the function of the product.  The Court disagreed:

The features Plaintiff’s expert highlights disregard the directional claim limitations of the ‘316 patent, and in doing so, the expert attempts to reassert [an argument] already rejected by this Court.  Specifically, in the Markman Order, this Court found that “each chamber has specific functional qualities that depend on its position” – hence an upper chamber and a lower chamber, as laid out in the patent specification.  Indeed, the expert vitiates “upper” and “lower” in the function prong of the doctrine of equivalents by disregarding their special position.  Additionally, in opining on the “way” prong, the expert states that SSP operates in the same way as JDP given SSP has “one chamber for holding a piece of hard candy and another chamber for holding a flavored liquid.”  The expert again neglects the “way” of upper and lower “where on compartment is above the other,” as specified in the Markman order.

The Court then held that because SSP does not have equivalents of an upper and lower chamber, it cannot infringe claim 1, part 1, under the doctrine of equivalents.

Although Topps expert argued that the only claimed function of the candy holder was to hold candy and did that no matter where it was oriented within the package, the Court rejected this argument as well:

The expert ignores the directional features of the ‘316 patent as found in the Markman Order, and opines that SSP performs the same function, way and result as Claim 1, Part 2 “wherever the handle is located relative to the candy holder.  Because the ‘316 Patent used directional terms to define its claim, the limitation of such terms cannot be avoided through the use of the doctrine of equivalents….Defendant is entitled to summary judgment on the issue of infringement by equivalents.

Here no reasonable jury could find that the trade dresses of JDP and SSP are confusingly similar because the lack of similarity between the two products is overwhelming…Taking these features into account, the overall impression of the two products are dissimilar.